Over the course of his career, Jeremiah Curtin (1838-1905) mastered over 70 languages and cultures, studying both their customs and history. In 1864, due to his fluency in Russian, he was appointed by President Lincoln to the post of secretary to the legation in St. Petersburg, Russia, where he served as a translator.

One of Curtin’s most influential projects was the translation from Polish of Quo Vadis, a historical narrative written by Henry Sienkiewicz, which details the apocryphal Acts of the apostle Peter.

Later in his career, he worked for the Smithsonian’s Bureau of Ethnology, where he assisted in the research and documentation of cultures, both local and foreign. In an effort to better understand these cultures, Curtin and his wife undertook a “world tour” in the 1890’s, where he visited places such as Egypt and the Far East. He also stayed close to home to study America’s Native-American tribes. The Curtin Collection is comprised of object’s that were collected during this tour as well as Curtin’s personal effects. 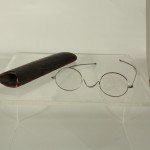