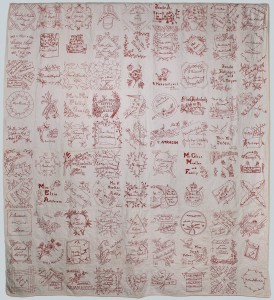 Members of Milwaukee’s leading German-American families, used a style of quilting called Redwork, to create blocks of textiles that contained their names and favorite designs.  Among the families represented are the Schneckhs, Seefelds, Vilters, Adlers and Lemkes.  The names of clergymen from various German-American churches of the period were also included. The completed blocks were assembled by the mother of the donor, in 1900.