Restoration of the interior of the school to its 1800s appearance was made difficult by a fire which had altered its interior some years earlier. However, members were diligent in their efforts, applying fieldstone to the foundations, replacing shutters and locating slate blackboards, double desks, maps, books and pencil boxes. Thanks to their efforts, fourth grade pupils in Milwaukee area schools may participate in a “living schoolhouse” program conducted by the Brown Deer Historical Society and experience the school world of their ancestors.

This golf course was opened in 1929 by the Milwaukee County Park Commission within the 365 acres of Brown Deer Park in the northern part of the community. Cited as one of the best regulation public golf courses in the country by Golf Digest, this 18-hole course has been the site of several national tournaments, including the A.S. Links Championship in 1951, 1966, and 1967.

An old farmhouse located on the course was the temporary clubhouse until a spacious new brick structure was built and dedicated in 1931. The clubhouse served as a community center in the early years, hosting dances, card games and other indoor activities, while also operating as a refectory throughout the year. The clubhouse is currently used by golfers during the golfing season and is rented to various groups in the winter months. The eastern boundary of the golf course once had natural hills for skiing but these were later leveled. Much of the early landscaping and construction of the course was done by Milwaukee County relief workers during the Depression. In its first two years of operation, the park reported over 15,500 permits issued to golfers compared to 60,500 by 1980. 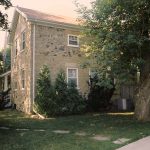 Built in 1856, this house is one of only four mid-nineteenth century residences in Milwaukee County with stone facades which show extensive use of native cobblestone, fieldstone, and limestone on its exterior surfaces. It was part of a larger area of Irish pioneer settlement in the old Town of Granville and illustrates the skilled craftsmanship of its builder 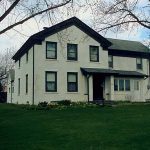 This typical Irish country residence was constructed in 1857 by James Healy, a well-educated gentleman who left County Cork in 1835 and came to the United States by way of Canada. At that time, the Wisconsin Central Railroad was building its roadbed through the Healy farm, and the stones excavated by the railroad crew were used to construct the house. Healy and his wife Catherine had thirteen children, eleven of whom survived infancy. He was an active member of the Town of Granville’s government, serving as Justice of the Peace, Town Clerk, and Superintendent of Schools. In 1861, Healy sold the house to John Diderrich and moved to Windham, Iowa. The Diderrichs added a second floor to the north portion of the house in the late 1800s. At the time of designation as a Milwaukee County Landmark, the residence was still occupied by the third generation of the Diderrich family. The property was designated for its historic significance.