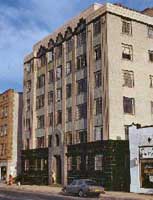 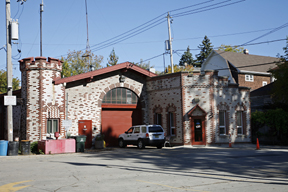 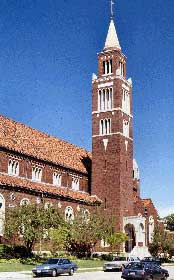 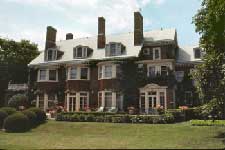 In 1844, pioneer carpenter, Benjamin Church built his home on North Fourth Street in the settlement of Kilbourntown. By 1936, the house had deteriorated so badly that it was ordered to be razed. However, a team of architects for the Historic American Buildings Survey recommended that the house be preserved as an excellent example of Greek Revival architecture. The architects also noted unique features in the home’s construction such as elm timbers strung between hand-hewn oak posts for wall supports and brick noggin placed between wall studs for insulation.

The Milwaukee County Historical Society helped move the house to county-owned land in Estabrook Park and the Wisconsin Chapter of the Colonial Dames of America provided the furnishings. On September 14, 1939, Kilbourntown House, named for its original location, was opened to visitors, restored to its appearance when built by Church, with additions from later years removed. In November 1970, a fire severely damaged part of the structure and its contents. An anonymous donor aided the restoration. The house contains furnishings from the period between 1845 and 1860. It is also listed on the National Register of Historic Places.

The real estate firm of Miller and Miller built this sixty-unit apartment building in 1930. Designed by architect Julius Leiser in Art Deco style, it was named Annason by its owner, Armin Miller in honor of his mother, Anna Miller. In 1944, the Annason Apartments, Inc. was formed to purchase the building.

The Art Deco trend used in the building’s design had become popular after the 1925 International Exposition at Paris which was organized to display “arts decoratifs et industriels moderne.” Art Deco reflects the energy and speed associated with the rise of the machine age in its motifs of ziggurats, sunbursts, stepped triangles and stylized green sunbursts over each window on the north façade and the glazed tiles in the form of a ziggurat over the top story. The polished aluminum address numbers seem to flash across the front door.

Milwaukee architects Walter Judell and Harry Bogner designed this Georgian home, built in 1923 for Frederick Vogel Jr. president of the Pfister & Vogel Tanning Company. The stately home on the Lake Michigan shore has twenty-three rooms and ten fireplaces. The interior decoration was planned by Leonard L. Lock, a New York designer. According to his plan, each room reflected the style of eighteenth-century English designers. The main entrance doors with their oak panels and brass knobs honor Christopher Wren, as does the living room. The imposing vestibule pays tribute to Joseph Chambers with its vaulted ceiling and statuary in niches. The stair balustrade and the hallway mirror owe their design to Robert Adam while the work of James Gibbs is reflected in the painted pine walls of the dining room. Thirteen acres of wooded grounds surround the home and the garage is equipped with a turntable for the owner’s automobile. The house was purchased by attorney Eric Passmore who lived there from 1942 until his death in 1979.

The nineteen-acre Shorewood High School Campus reflects the community’s emphasis on education in the 1920s when the school was first planned. The campus setting was unique in that it resembled a college more than a secondary school. In 1925, the first building was completed. Floodlights have illuminated the football field and athletic track for night events since 1934. By 1938, five more buildings were added. These included an industrial arts building, classrooms for arts and sciences, a physical education center and a gymnasium. The original structure became the school administration building. An auditorium modeled after the RKO Theater in New York City, seating up to 1,300 people, was constructed in 1936. A swimming pool was built in the mid-1970s.

Since 1928, the Shorewood Opportunity School operated from the campus offering evening educational classes and recreational activities for adults until 1970. During the Depression, the Opportunity School developed into a popular community center offering courses in social studies, home economics, the arts and theater.

The Lindemann / Sijan residence was designed by architect Elmer Grey for Aaron Heydeck and constructed in 1916. An English cottage of the Arts and Crafts tradition, the house features a built-up roof which simulates thatching and a side entrance with a porte cochere. The property was designated for its architectural significance.

St. Robert of Newminster Church was erected by the parishioners of St. Robert Parish in 1936-37. The church is an outstanding example of the Lombardy Romanesque architectural style, characterized by rounded arches, vertical features, vaulted ceiling, and pillars. Several features of this style are evident from the front façade, to the side entrances, to the vast interior. These features include the tall vertical lines of the building itself, the rounded portals, the tympanums over the doorways, and the rose window in the upper reaches of the front of the church. The interior features a barrel vault ceiling, rounded stained glass and art glass windows, tall marble pillars, baldachin in the sanctuary, ornamentation on the pillar capitols and a mural on the apse ceiling over the high altar.

The building is 200 feet long, from 70 to 100 feet wide, and 50 feet high. The campanile tower on the east side of the building rises to a height of 231 feet at the center of the bronze Celtic cross. The spire, 18 feet in height, was clad in galvanized copper-penny finish steel after water and storm damage demanded the removal of the original Italian tiles in 1999. The east portico is incorporated in the tower.

Many Celtic designs decorate the structure – a nod to the Irish heritage of the founding pastor. These designs include the cross on the campanile tower, the round windows on the side walls of the nave, and the medallion that was on the original altar and is now on the tabernacle table under the baldachin.

Although renovated in 1990 to bring the interior up-to-date liturgically, the changes blend in well and the church holds true to its original design. The original marble from altars and altar railing were used to construct a new mensa altar and ambo.

Hubbard Park occupies a strip of land 1,400 feet long between the Milwaukee River and the former Chicago and Northwestern Railroad. Prior to the park’s 1922 purchase by Shorewood’s Village President William J. Hubbard, this land had been eclectically used for Indian hunting grounds, a resort (Ludemnann’s-on-the-River), a mineral spring park, an amusement park, a terminal yard, cow barns, fishing shanties, and a distribution route for ice cut from the river. In 1936, the WPA-funded Community Lodge (now called the Shorewood River Club) was built to hold community events, a function it still performs today. North of this is Hubbard Park Lodge, originally the Scoutcraft Cabin, designed for use by Boy Scouts and Girl Scouts. These state-funded workers also graded and terraced the land, created pathways and a spring-fed pool and fountain. In 1962, the Shorewood Women’s club remodeled and updated the building.

Distinguished by its decorative brickwork, turrets, and battlemented parapets, the Shorewood Department of Public Works Administration Building was constructed in 1936 with funding from the federal government’s Works Progress Administration. Shorewood resident Henry C. Hengels was the architect for the Administration Building. He also designed the Shorewood Police and Fire Safety Building and the Pavilion-Bathhouse at Atwater Beach. Hengels was appointed State Architect for the State of Wisconsin in 1920, and he was responsible for the design of many of the Wisconsin State National Guard Armories. The property is designated for its historic and architectural significance.